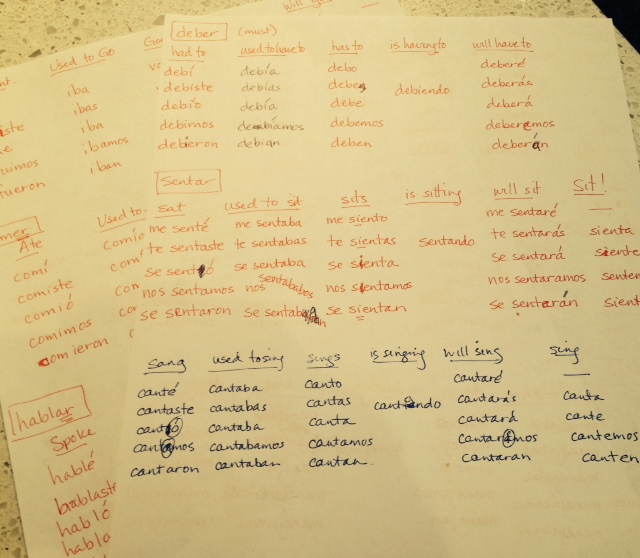 I’ve decided that I should learn to speak Spanish before we leave on this trip, which I recognize is silly since that’s the entire *point* of us going.  For twelve years, living in San Diego, I’ve tried to learn to speak Spanish.  I bought 3 different teach-yourself-Spanish books but never made it past the “j is pronounced like English h” page.  The problem is that I already know a bunch of Spanish words, so I think I’m hot shit and the introductory exercises bore me.  I’ve got, “Como estas?” already, thank you very much.

But the Spanish I know is just a soup of unrelated nouns and adjectives: body parts and food, relationships and furniture, temperature and attractiveness.  And signage words, of course, and your basic greetings, and a couple phrases I learned from our nanny.  So my actual Spanish consists of the ability to say, “Danger!” and “Pretty sister!” and “Hands together, hands down,” and “In case of emergency, hot chair.”  None of these phrases seem particularly useful to me in actual life

What I lack is verbs.  And prepositions.  My Spanish has no motion and no direction.  It just sits there, being handsome or cold.  So yesterday I went online and looked for a non-book option for learning.  After listening to ten or so tedious dialogues — “Hello, my name is Carlos.” “Hello, Carlos.  Where are you from?” “I am from Peru.  Do you live nearby?” “Yes, I live in the red house.” — I gave up again.  Where is the *useful* Spanish, the part that gets shit *done*?

My verb-free philosophy has deep roots.  When we arrived in Naxos, we had a phone line turned on in our apartment with The World’s Most Erratic Dial-Up Connection.  No joke: when the ferry passed between Naxos and Mykonos, the connection broke and we had to start over with the “wheeeeee – wheeeee – scratchyscratchy – wheeeee” dial-up noise that still causes a flutter of panic in the hearts of anyone old enough to suffer through dial-up.  The day before we left, we took ourselves down to the telephone office — a large room full of Greek men at wood-paneled high counters, looking vaguely bored, in which you had to wait awkwardly by the door despite the complete lack of people actually being served at any of the counters.

When our turn came, I used my very best Greek. I said very slowly in Greek, “Tomorrow we good-bye Naxos. Phone closed please.”  The unsmiling gentleman shook his head: “Sorry speak Greek”, he replied in surly English.  I smiled understandingly, like I realized that I was asking a lot of him, and I tried again, carefully pronouncing the Greek words: “Tomorrow we [gesturing to Eric and I] goodbye [waving] Naxos. Phone [miming a phone] closed [international gesture for kaput] please.”  Again, he frowned, shaking his head like a fly was bothering him, and repeated, “Sorry speak Greek.”  I repeated the bizarro game of quasi-charades with the same result, except the telephone guy was no longer paying any attention and I was getting frustrated.  “What language does he think I’m speaking?” I said to Eric.

A younger man from another section of counter approached at this point and rolled his eyes at Mr. Sorry-Speak-Greek.  A burst of Greek flowed out of him over his colleague, none of which I technically understood, but the intent was clear: “What the fuck is wrong with you?  These two are obviously leaving Naxos tomorrow, jackass, and need to turn off their phone. What the hell else could they mean?  Oh, and did you notice they — unlike any other non-Greek on this godforsaken island — actually tried to speak Greek?  Give them some goddamned credit.”  At least, that’s what it sounded like to me, and Mr. Speak-Greek gave us a bill for an outrageous amount of drachma and let us go.  Victory for my verb-free philosophy of language.

But we will be in the Spanish-only world for much longer than in Greece, and finding an apartment and enrolling my precious children in school is going to require a much higher level of communication that Mr. Sorry-Speak-Greek required.  So verbs it is.

To start, I picked ten verbs I could imagine most frequently using and wrote down how to conjugate them in present tense.  Because, really, who needs past or future in basic communication?  You just use the present with the modifier of “tomorrow” and, bingo! You’ve got the future tense.  Add “yesterday” and you’ve blasted into the past.

Of course, the counterargument to my you-only-need-the-present-tense is obvious.  Namely, it only helps me tell someone else something.  If they use the future tense of “to go,” will I have any idea what they’re talking about?  Or will I have to counter-translate — “Oh, do you mean ‘We go yesterday’?”  But I have my present-tense verbs on sticky notes around the house — to speak and to love on the wall next to the knife rack, to eat and to go on the bathroom mirror, to write and to come next to my computer.

I have two versions of to be as well.  One seems to be called to be (temporary) and the other to be (permanent).  I know that “estoy bien” so clearly the state of being good is a temporary one.  And “soy Becca” so clearly my name is considered permanent.  But I can’t wait to figure out — in Central American culture — where the line between temporary and permanent is.  Does changing the form of “to be” make the sentence wrong, or just change the meaning?  Like “estoy una estudiante.”  Does using “soy” change the meaning and make it sound like I am eternally learning, that I am a student of life, whereas “estoy” just means that why, yes, I am enrolled at the Spanish school down the street?