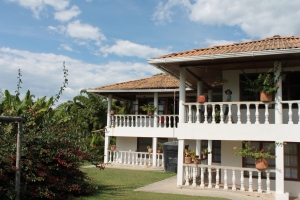 Immediately following the refrain was this thought: This will be the exact moment I look back on later and shake my head ruefully, thinking, “Well, duh.  I really should’ve known better.”

Because, last weekend, I found myself rubbing an unknown pomade pressed into my hands by our monolingual hostess onto my son’s oozy mosquito bites.  Assuming that the locals are correct in their assessment that malaria is only present on the coast and in the Amazon, not here in coffee country. Saying yes when offered a black sausage-like substance and continuing to swallow after hearing the ingredients included sangre de cerdo, which even my minimal Spanish skills can translate to pig’s blood.  Following a guy with a machete up a river to a swimming hole peopled with pot-smoking Colombianos in their underwear. Eating fried plantains with cheese at a roadside stand well after midnight on a deserted country road.  Tucking my kids into their room, with no working lock, 100 yards of guard dogs and chickens and darkness from me, in a house of pretty-much strangers (aka brand new friends), deep in rural Colombia.  Hauling through a forest of plantains, bananas, corn and coffee in the back of an open Jeep along roads steeper and less well-groomed than your average national park backcountry trail.  And most egregiously, handing our ATM card and a scrap of paper with our super-top-secret code to 16-year-old Valentina to ride her moto (the only form of transportation available) to town (45 minutes, half on rutted trails, ergo she couldn’t bring a passenger) to get money from the ATM so we could pay the bus driver to pick us up on the side of the road and take us back to our apartment in Medellin.

But you know what?  The mosquito bites healed more quickly than usual, and no one shows signs of malaria yet.  I didn’t throw up from the sausage.  The swimming hole was amazing and the fried plantains were delicious.  My children made friends.  The Jeep got us to the feria [fair] in Manizales and to the termales [hot springs]. Valentina, after 3 ATMs, brought us back our money with our account intact. We made it safely back to our apartment which, before leaving, felt terribly lonely and foreign but — after last weekend — is a homey, familiar haven. 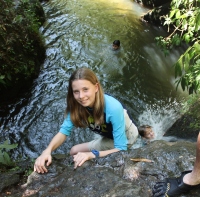 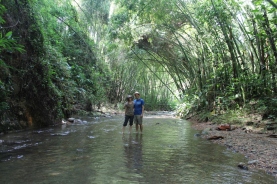 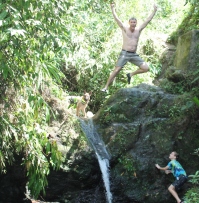 And the pay-off for gritting my teeth through these dubious situations was walking through a gigantic cathedral of bamboo arcing over a clear river.  Not bringing snacks on our hike because we could just reach up and pick mandarinas, guavas or granadillas from where we stood.  The homemade meals of Viannay (our hostess) featuring fresh-squeezed juices, just-plucked chickens roasted in a fire-fueled asada oven, fresh-made arepas, soups swimming in rice and cilantro, eggs laid that morning and chocolado that we helped make.   Learning to dance tropicales from Leo, a tough Colombiano of both indeterminate age and position in the household (husband? boyfriend? employee?) whom I topped by a good four inches.  An entire family who patiently waited for us to find the right word, ignored the complete lack of tenses or grammar, and slowed their stories to a four-year-old’s pace. Watching Jack and Juan Jose, a semi-adopted 12-year-old son of our hostess play game after game — board, video and physical — with about 10 words in common.  The sunsets.  The endless waves of green mountains.  The half moon, hanging low in the sky.  Yes, even the chickens, whose patriarch insisted on marking each hour of the entire night, not merely the sunrise, directly outside my window.

This is why we’re here.  Those moments of loosening the reins a bit and doing the things that other people do every day, even if it’s different, or scary, or disgusting, and (usually) being rewarded with something a tourist, skipping like a stone over the surface of a country, would never experience.  This is traveling.

For the first week, Spanish came rushing toward me in a monolithic wave of sound.  Occasionally, I picked out a familiar word here or there, like pieces of flotsam, but the majority was undifferentiated noise.  Something shifted this weekend, though, during four solid days of all-Spanish at the finca.  It’s like the sound became pixelated.  I can hear where words and phrases start and end, even if I don’t know the words themselves.  Also, last night, I made cocktail conversation with two of our neighbors.  I know where they’re from, how long they’ve lived in Medellin, all about their work and children and I could tell them the same things about me.  It was undeniably awesome.

The kids are following a traditional curriculum, working their way day by day through numbers, days of the week, nouns, verbs.  Our apartment is sprinkled with brightly-colored sticky notes naming the objects underneath them.  El espejo. El cojin.  La nevara.  It’s working fine for them, but I have no patience for that; although at some point I might care how to say “pillow,” I have much more pressing concerns.  Like what the cashier says to me every time I check out at the grocery store that brings the whole process to a halt, except that now I know to just say, “No,” to that first question, whatever it is.  And how to ask the security guard if our landlord dropped off the extra keys.  Where the recycling is. How much a pedicure costs (this could be a whole separate story, but I’ll summarize with this: in a 100-square-foot salon, for about $6, I got the most thorough cuticle trim of my life and met my first transgendered Colombian, a six-foot, heavily-made-up stylist who has been or is sometimes a man).

So Eric and I spend our daily 3.5 hours with Robinson, our professor, grilling him about specific situations or concepts, which he indulges and then occasionally tries to tie back to an actual curriculum.  For example,  I’m tired of constantly saying the equivalent of, “I say, but yesterday,” while gesturing over my shoulder. So yesterday, we ask to skip ahead to past tense.  Sure, I only know about 20 verbs, and am completely flummoxed by the numbers associated with Colombian currency where $1 is 2400 pesos so it’s muy importante to know your numbers to a million.   But now I can “talk”, “be talking” AND “talked.”  Next week, I may ask to “will talk.”