In Spanish, there are four different ways to say “I was”: estuve, estaba, era and fui, meaning variously, “This one time, I was…”, “For a while, I was…”, “I pretty much permanently was yet something changed since then,” and something else that I haven’t quite grasped because that word can also mean, “I went,” and what does “went” have to do with “was”?

I came a bit unhinged when I learned this.

Because that totally makes sense.

None of these forms tackle “I might be” or “I would have been” or anything legitimately complicated — just the plain old “I was” that somehow we in English can handle — Talking about me! You! Us! Them! She! Any combination of people you want! — with two tiny word: was and were.

This is a screen shot of the first page (I know; they need more than one page!?) of Spanish Dictionary’s guide to conjugating caminar, that bland-vanilla, poster-child-for-regularity verb “to walk.” 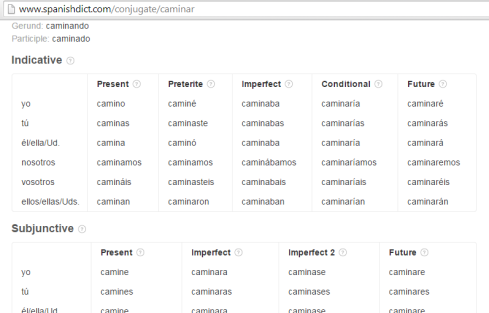 If you decided to count — which I did since I’m in a bad mood about this — there are over 50 different conjugations for one stupid word.  How many for English?  Let me list them out, because I’m being tedious:

Four.  I am dazzled by the simplicity.

Yet we can still imbue it with all the necessary nuance that something as dull and prosiac as walking deserves.  I was walking. She had been walking.  Let’s walk.  I’m going to walk.  Don’t want to walk?  You can replace any word in the same structure — No memorization of endings required! — and it still works.  I was yodeling.  She had been insinuating.  Let’s floss.  I’m going to rationalize. Romance languages are famous for their ability to capture nuance, but isn’t that what eyebrows, hand gestures and italics are for?  Really, how much nuance does walking really need?  Wouldn’t it be more fun to memorize the Spanish versions of amble, stride, strut and slink instead of spending precious moments trying to remember if it’s -amos, -emos or -iamos when all you’re doing is putting one flippin’ foot in front of another?

I used to feel bad for English learners that the past tense of “find” is “found,” that the plural of “moose” is, you know, “moose,” and that whole -ght debacle.  But I don’t anymore.  Fifty forms of “to walk”…. Seriously.