One of our friends, back in our career-and-beer 20s, wrote news for a local Boston TV station.  We would tease her about the station’s feature exposes, each a variation on, “What you don’t know about peanut butter could kill you.”  We’d sit around in various bars and put on our smarmiest TV announcer voice, filling in the blank with the craziest things we could think of which seemed unlikely to kill us: drywall, pierced ears, fire hydrants, 2% milk, Kevin Bacon.  And she would good-humoredly tell us whether that particularly story had already been written.

Apparently, however, in the Amazon, this is a real thing.  Everything I don’t know can kill me.

We are on Lago Sandoval, an oxbow lake off of the Madre de Dios! river in eastern Peru.  The closest town is Puerto Maldonado, which is poor in the way that you might expect in a remote Amazonian town, all cinder blocks and rusted corrugated metal and unpaved roads crowded with three-wheeled moto-taxis like the tuk-tuks in Thailand.  The river joins other rivers to form the actual Amazon a few hundred miles north at the Ecuadorean border, and of course it is not actually spelled with an exclamation point.  That’s my addition, because it sounds like such a swear word/exclamation: Madre de Dios, it’s hot out!  Madre de Dios, that caiman was huge!

Our guide, Timo, has that semi-blase attitude toward the deadly that only 22-year-old natives of a dangerous place can have.  “Don’t touch that tree,” he says casually to our five spazzy children.  “It’s covered in ants.”  To me, they look like slightly-oversized normal ants, the Arnold Schwarzenegger of the ones in my garden.  Apparently, however, they will swarm you, bite you and you will die.  All trees are covered with stinging spikes, except those that walk (for real).  A single bite of mushroom causes instant death.  Human-sized wasp nests hang overhead.  Under the brown river water lurk electric eels and stingrays.  “You could swim,” he tells the child who asks, “but most people come out crying.”  At this point, I suspect that the gorgeous butterflies carry a flesh-rotting disease and those adorable spider monkeys are just waiting for the opportunity to eat my face off.  This is not a destination for the timid or squeamish.

Timo showed us a weird lump on his finger from when he was riding his moto in the jungle and a jumping spider landed on his hand.  “It didn’t hurt much at first, but I ended up in the hospital for three days.”  HIs brother was bitten by a snake and ended up bleeding out of his ears.  Apparently he’s fine now.

He also has an interesting definition of “poisonous.”  Poking with his hand at a complex web of 25 small brown spiders, one child asked, “Are they poisonous?”

Halfway across Lake Sandoval, in our canoe, a espresso-cup-sized fur-covered spider crawled out from under a bench.  I had already been informed that my notion that the larger the spider, the less dangerous it is — learned in the jungles of Australia — was a myth.  “Wolf spider,” he shrugged, like it’s no big deal to be a passenger in a small, tippy boat with a spider who can kill with one bite, on a lake infested with three-meter-long caimans.  Timo scooped it up with his bailing tool and threw it overboard.  Where it promptly — no joke — hopped toward shore on top of the water.

After the spider was disposed of, we stalked caiman, one of which swam toward our flashlights and rested its head on Timo’s oar — “I’ve never seen one do that!” he exclaimed, which is diametrically opposed to reassuring — and a family of river otters.  The idea of river otters drew a chorus of gooey, “Oooohs!” from us.  Until we caught a glimpse of their gigantic fangs ripping apart a fish.  “We call them lobos del rio.  How you say in English… river wolves?”  Timo explained.  “Even the caiman don’t mess with them.”

Of course I must mention the rickety rusty lookout tower with a boa constrictor curled up in the eaves directly over our head.

After each trip, as the danger escalated, we returned to the lodge, grateful to still have a complete family and functional limbs, and talking about Francis.  Francis, who shepherded us safely through four days in the Sacred Valley near Cusco.  Francis, in his pressed button-down shirts, who could explain both the force dispersion principles of Incan construction and rural village dating habits.  Francis, who showed up with our taciturn driver Willy at precisely the predetermined hour each morning, iPhone accurate.  Francis, who gave us deliciously interesting adventures — eating guinea pig!  trying chicha! — yet made Peru feel like the safest, friendliest country in South America.  Timo was no Francis and Lago Sandoval was no Sacred Valley.  This was the arena in Hunger Games and we weren’t from District 1.

The odd part for me is that nothing here really looks that dangerous (except the caiman; those dudes are prehistorically freaky).  Maybe I watched The Jungle Book once too often, or heard too many references to “darkest Peru” but, meh.  Walking along, it looked just like any overgrown forest trail.  I could have been in the White Mountains, or on the Olympic Peninsula.  At least until Timo started talking.

Even with all of this drama, I recognize that the two biggest dangers of our Amazonian time were (1) the incessantly voracious mosquitoes who appear immune to 30% DEET solution (“More hot sauce! More hot sauce!” they chanted happily, as we slathered on more and choked down malaria medication) and (2) the fact that we are mere days from returning home and the entire group is in meltdown mode.  (I can name these dangers now that we have safely left the region — but don’t worry; I didn’t say it out loud until everyone emerged in Cusco with all 10 digits on both hands and feet.  If we had required a visit to the Puerto Maldonado “hospital,” I would be writing a different piece).

There is a segment from a Looney Tunes cartoon that I vaguely remember, where Elmer Fudd or someone is driving an old Model T-like car across the desert when suddenly the bumpers and doors and tires start falling off, leaving only a useless, rusted chassis behind.  He hops out and kicks what’s left.  This is our group of ten right now.  One by one, like a bad horror movie, we’ve melted into puddles of humanity.  Stomach bugs, spider phobias, exhaustion, shady tour operators — in the end, even too much salt on the eggs is enough to set off a vale of tears.  It’s time to go home.

Luckily, back in Cusco, fed, showered, DEET-free and headed to the chocolate museum for our final afternoon, survival seems slightly more assured.

(Okay, I admit, there were lots of beautiful things too.  Here are a few.  Photo credits: Retta.) 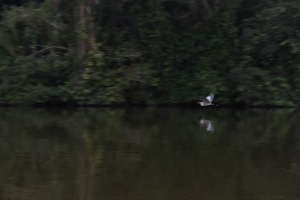 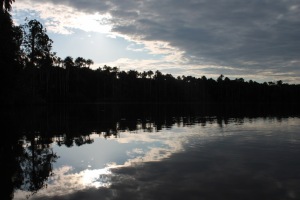 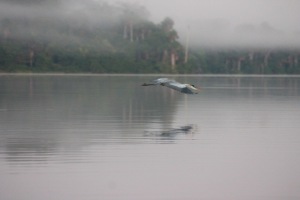