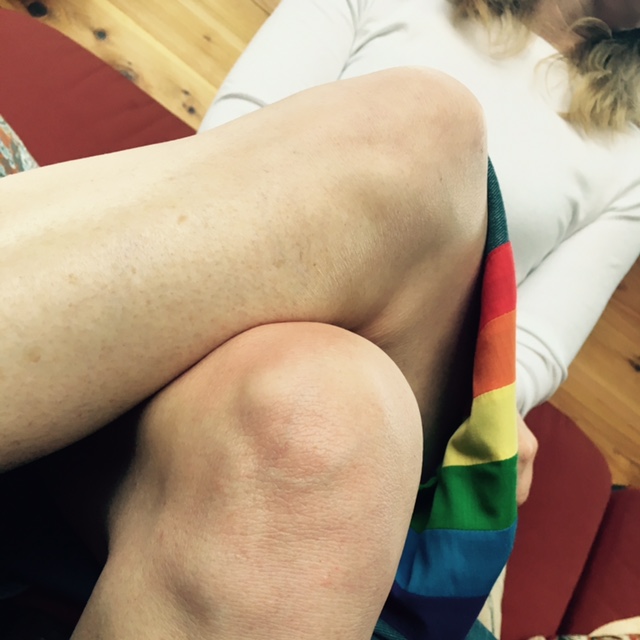 “Those are great pants!” I said to the mom next to me at the beach picnic. They were embroidered and loose, hitting mid-shin in that perfect casually-chic way.

“Thanks,” she said. “They’re great because no one should see 45-year-old knees.”

The other moms in the circle nodded and laughed, and the conversation moved on. I stood there, clutching a soggy paper plate of lentil dip and quinoa salad, puzzled: What’s wrong with 45-year-old knees?

Later that night, I surveyed my knees in a full-length mirror. I hadn’t looked closely at them in years, except to ensure I had shaved recently enough to wear a skirt to work. My inspection uncovered some discrepancies between reality and my younger-knee memories: a pudgy spot above the kneecap drifting vaguely downward into some wrinkles, mottled pinkish discoloration in the tough skin where I kneel, scars I don’t remember getting.

I was appalled. How had I not noticed!? Here I was, cruising around the neighborhood in running shorts and throwing on my old cut-offs for beach picnics, subjecting unsuspecting strangers to these droopy, odd-looking features. The above-the-knee skirts I wear to work must make me look positively prehistoric to my colleagues, I thought in horror. I resolved to clean my wardrobe of all knee-baring items, put on my baggiest pajamas and went to bed, ashamed.

The next morning, I threw my knees a resentful look as I got in the shower. How dare they betray me like this? How unfair, I thought, that I can’t have nice knees like other people.

But there was something so familiar about this line of thinking that I caught my breath. It’s the same dialogue I had with my breasts for decades because they are unfashionably — often uncomfortably — small. It was the same thing I said to my belly after my kids were born, when it still hung soft and squishy instead of returning to the tautness I expected. It was the sentiment I expressed toward my neck, looking at pictures of myself with my head turned, the same “ruffles” forming that my daughter likes to stroke on her grandma’s neck. My at-risk chin, the ever-growing shelf under my butt, the hobbit-like tuft of hair on my big-toe knuckles: each of them had received my disdain until, over time, I worked my way to an uneasy truce.

But now I had to worry about my knees, body parts so utilitarian, so unremarkable, that I hadn’t noticed them in years.

It all slid into focus: the shame we’re made to feel about what’s completely normal, the thousands of little ways we’re told we’re not enough unless we’re perfect, the blatant waste of an entire gender’s time and resources striving toward unattainable beauty standards.

And I decided no. I draw the line at my knees. I will not waste a single additional moment loathing them.

Because my knees rock. They’ve climbed mountains, volcanoes and glaciers. They’ve crawled across endless floors, building train tracks and battling monsters with toddlers. They’ve lifted stacks of lumber, shoveled driveways of snow and run thousands of miles. They kicked me away from a white-tipped reef shark on the Great Barrier Reef and scrambled over Roman ruins in the Syrian desert. They shook a little when I stood at a podium in front of 400 people for the first time, but they held me up.

Of course my knees don’t look like they did at 25. Because I’m not 25. We’ve been through a lot together since then, my knees and I. They deserve respect. They shouldn’t have to hide under flowing skirts and capri pants. In fact, they deserve a standing ovation for all they’ve accomplished from the younger knees they pass every day.