Everything in Colombia is difficult.  That sounds melodramatic, and I recognize that the degree of difficulty would be much greater in, say, a remote African village, or an Asian country where I can’t sound out street signs, or anywhere in the Middle East, but there, I’d have lower expectations.  Here, everything seems straightforward and simple.  Until it isn’t.

For example: I spent this morning being unexpectedly interviewed by nuns.  In Spanish.  In my running clothes without breakfast or my husband because I had (mis)understood the entrevista following the entrance exam to be for Retta only, not for the whole family.  So I showed up, sweaty, hungry and without a strong grasp of the past tense, and proceeded to field in-depth questions about my religious background (not Catholic but obviously Protestant which I suppose dances near the outside edge of truth), Retta’s birth (natural?  how much did she weigh?  for how long was I pregnant?), what my husband does for a living (something I struggle to describe adequately in my native tongue), why we chose their specific colegio (truth = close to our apartment), and my expectations for my children’s learning plan (um… speak Spanish?).

My shining moment was stopping the nun who was explaining to Jack that he would learn many new things at Catholic school because here, at Colegio de la Presentacion, they study las oraciones amarillas.  I asked for clarification; “What are yellow speeches?”  Turns out she said las oraciones de Maria.  Yellow.  Mother of God.  Anyone could make that mistake, right?

Every day, people.  This is my life every day.

Errands are the worst.  At home, “errands” are accomplished by hopping in my car and heading to Target and maybe Trader Joe’s on my way home from work.  Or logging onto Amazon Prime.  Here, it requires so, so, so much more.  Leaving aside the everyday-difficult tasks like procuring a taxi via a doorman who I confidently assert does not speak a single word of anything resembling actual Spanish, here is a small sample of what is involved in keeping people in my household fed and clothed: 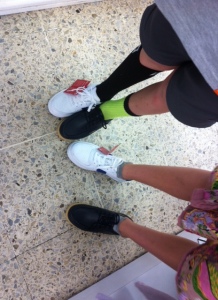 Figuring out when Senora Olga is available to measure every conceivable part of my children to custom-make their uniforms including a pinafore for Retta, because somehow, the memo that teen girls shouldn’t wear pinafores hasn’t made it here.  Waiting (no exaggeration) for 10 minutes while three grocery store cashiers triple counted the $2.5 million peso payment the man in front of me made, because this is a cash-only culture, yet everyone still has to pay for appliances, and cell phone contracts, and rent and they for some reason often do each of these things at the grocery store.  This also means that, before leaving the house, we have to estimate how many 50,000 peso notes we will need for our day, trying to intuit how much everything from a dive trip to a pair of uniform-compliant saddle shoes will cost (about the same, actually — $50).

Basic errands also mean mis-converting my kids’ shoe sizes to European sizes then clumsy-apologizing for making the nice shoe lady climb to the attic seven times for just my two children.  Being betrayed by both charades and GoogleTranslate seeking pins at a fabric store.  At one point, halfway through the game when the three fabric store employees were all huddled together, looking at me like I wanted yak butter or something, I started wondering if maybe Colombians sew without them, but that seemed crazy. But not as crazy as being told to knock on a door that clearly signed with, “Do not knock.  Wait in the waiting area”, or creating a train of bemused fruit and empanada street vendors as we searched for a place that could provide five matching passport-sized photos for the school (I didn’t bother trying to figure out why because at that point, you just do what the nuns tell you to do). Also, walking multiple miles to find a store that sells pencils and a block eraser: $1.25 of merchandise, but 2 hours of my life for something so basic.

In the meantime, Eric has worn a path between our apartment, the bank and the school trying to get the right combination of documentation, receipts, credit cards, cash and random numbers to pay the matriculation fee and first month tuition.  In contrast, earlier this week, we signed Jack up for the 2015 San Diego soccer season in six minutes via a website, our Mastercard and an email.  From 4981 kilometers away. The Colombians could learn a thing or two
from that.

(We have been in the school office so many times this week and made so many mistakes in our attempt to gather information and then enroll that even the gruff, don’t-mess-with-me school secretary almost giggled at the absurdity during our most recent visit; it was more of a huffy eyeroll, but I could feel the smile behind it.  I shiver just contemplating the visa extension process that we start in a couple weeks.)

But this is why we don’t respond to emails in a timely manner.  This is why — every few days — I hide in the apartment all day. Every single person we dealt with — even the woman behind the door we knocked on despite signage to the contrary– is so nice and lovely and helpful but, dear mother of pearl, it is SO. MUCH. WORK.