The following thoughts are culled from various one-off discussions with the children (aka “interviews”) when they felt like sharing information about this new world – Colegio de la Presentacion – that they have entered.  For Retta, these discussions come in a daily hour-long monologue where the English that has been building up all day comes pouring out, like word vomit (actual English word: logorrhea). Or like popping a particularly juicy pimple.  For Jack, it’s in two- or three-sentence nuggets, between laps in the pool or apropos of nothing at the dinner table.

Background: Their day starts at 5:15, when they put on their uniforms – still only their gym uniforms because Senora Olga hasn’t called with their custom-tailored normal-day uniforms – and shovel in some oatmeal or yogurt and granola.  Then they set off with Eric through the still-dark streets on their eight-minute walk to school, where they begin the day with hymns at 6am.  This part is all hearsay for me, since I am still asleep.

The school is shaped like a figure-eight: white stuccoed columnades surrounding two bouganvilla-filled courtyards, one for the primario (up through grade 5, which is Jack’s year) and the other for the bachillerato (grades 6-11; Retta is in septimo or 7th).  Inexplicably, the high school courtyard is peppered with heron and mushroom yard ornaments.  From its founding in the 1880 until two or three years ago, Colegio de la Presentacion was a girls’ school; now the ratio is about 4 or 5 to 1, girls to boys.  There are 5 boys in Jack’s class: Santiago, 2 Nicolases, Manuel and Jack.  There are only 3 boys in the other fifth grade class; he doesn’t know their names but just calls them “the puppies” and laughs.  It is not clear why.  The juxtaposition is sharp; a few boys looking like well-dressed computer programmers in their navy slacks, white button-down, leather belt and polished shoes, surrounded by flocks of girls in blue plaid pinafores, the older ones looking like full-grown women dressed as little girls for Halloween.

In their seven-hour school day, they have four or five classes each day, plus two descansos [breaks].  The children stay in the same classroom all day; the teachers come to them. Retta’s weekly schedule, for example, is this:

At 1pm, the primario lets out.  At 1:30, the bacchilarato.  The pick-up process makes Grant K-8’s cone zone look like a well-

rehearsed Ethel Merman routine.  While we wait for Retta, Jack and I sit in the courtyard, like a bag of potato chips at La Jolla Shores; the seagulls circle closer and closer until one is brave enough to ask us a question, then they all swoop in and chatter non-stop until we stand up to leave.  Our children then come home and mow through the kitchen like a two-person proverbial plague of locusts.

Jack, on speaking Spanish all day: It’s hard.  And tiring. But I’m learning a lot.  Like I understood what that girl just said [referring to the maybe-eight-year-old who just rushed up to him, blurted an incomprehensible sentence, laughed and dashed away].  “Una amiga de mio esta enamorada contigo.”  One of my friends is in love with you. [Upon my expression of amazement, he shrugged tiredly] It happens all day long.

Retta, on English class: The teacher asked me to walk around and help people who had questions, basically be teacher’s pet, but it didn’t go at all like it would in ‘Murica. [Ed.note: Because Colombians are appropriately sensitive to estadounidenses calling themselves “American” –every resident of this continent is also “American” – we’ve taken to referring to our home country with the most George-Bush-possible accent: ‘Murica.]  He hadn’t even explained the assignment and people already had their hands in the air, calling, “Loretta!  Loretta!”  So I ignored them for a few minutes because I knew they couldn’t really have questions yet, but then I helped.  There’s this one boy, a lot like X [ed.note: name redacted to save his reputation] but he hasn’t had a nurturing group of friends like us to teach him how to be less spazzy.  So I ignored him for a long time until it would have been rude to wait anymore.  When I went over, he grabbed my arm and said something. I didn’t understand the words, but I could tell pretty much what he meant, so I just pulled my arm away and left. 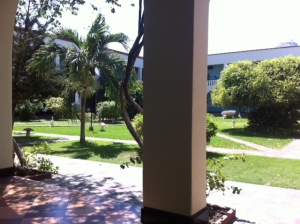 Jack, on dance class: I’m scarred. Scarred.  We had dance class today and the kids before us — maybe 7th graders — they were dancing with hips.  And booty. [meaningful eyebrows]. And the dance teacher’s t-shirt, do you know what it said?  “Fighting for peace is like f-ing for virginity.”  Except it didn’t say “f-ing” but the real word. [wide eyes] He teaches kids. In Catholic school.

Retta, on the social dynamics of Colombian middle school: A girl invited me over after school, but I don’t want to mix home and school life, or be rude, so I’m going to say that you won’t let me go. Another girl wrote me a note in Spanish with her phone number and email and stuff, in case I have questions about homework.  She’s that girl who wants to be friends with everyone but no one wants to be friends with her.  You know, there’s always a girl like that… I have to check my Instagram profile because everyone was asking me if I have Facebook or Snapchat or whatever, so I gave them my Instagram name but I don’t want to offend them by having anything too mean about Colombia there… There’s this tall boy in the class.  I’m not sure if he’s a year older or just really tall.  I sit in the front row and he sits way in the back, but he came all the way up to my desk to ask to borrow a pencil.  He also asked me to walk around with him at descanso.  I did, but it was sort of boring.  I can make small talk in Spanish if people ask me questions, but he was really quiet. So now I kind of hide behind my friends — you know, the girls — when he’s around because I don’t really know how to tell him I’m not interested without being rude, in Spanish.  It’s weird to be one of those girls that hides behind her friends because I’ve never done that..

Jack, on the social dynamics of Colombian fifth-grade: During the descansos [break], I eat my lunch while I play futbol with the fifth-grade boys. Santiago is really good, but I’m better at defense.  No, none of the girls play futbol with us. Some of them play volleyball and others – I noticed, you know, when the ball went over there [apologetically, so it’s clear he wasn’t watching the girls or anything…] – play something with a rope around two girls’ ankles… I think Santiago has a girlfriend.  She sits one behind a knight over from us [chess-related locational description].  He’s always walking over to her desk.  I think he tried to kiss her once, but I’m not sure it worked.  No [dismissive look], I don’t know her name.

Jack, on the nun who introduced herself to me as one of James’ teachers, with a vaguely puzzled look: I don’t have any hermanas as professoras. [Ed.note: remember, Jack is James [HA-mez] here and is not always the most observant child.]