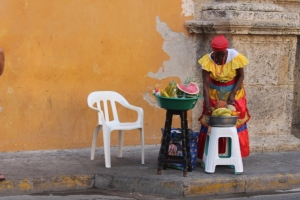 Cartagena is a strange stew — one part Rodeo Drive, one part the seedier section of New Orleans, and one part quasi-third-world nation.  The juxtaposition is startling.  Painfully picturesque, but smelling vaguely of urine and sweat. Toothless men push sloshing handcarts of dodgy limeade past gorgeous arrays of high-end handicrafts gleaming behind spotless plate glass windows.  A skeletal drunk lays in a crumbling doorway cross the street from the Ferragamo store.  And it’s hot.  Sticky, steamy, heavy hot, the kind that leaves you a bit breathless, the kind you have to lean into as you walk.

The streets crawl with extranjeros of all ages, pink and vaguely puffy-looking after months surrounded by svelte Colombians. 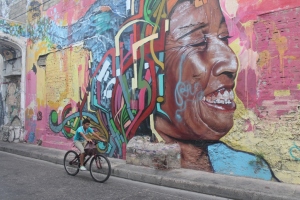 The women all in their “resort-wear”: long, loose dresses, wide-brimmed hats.  The men wear their fiercest, don’t-mess-with-me faces, guarding cameras slung around their necks, pale chicken-legs beneath their shorts. These tourists are older and more well-fed on average than the extranjeros in Santa Marta.  But there are still twenty-somethings, in frayed shorts, stumbling a little under their giant backpacks, or in the evenings, in their “dress-up clothes” (rumpled batik-print dresses are still the norm), creating the story they will later tell of the epic time that they had in Cartagena.

There are Colombians too, of course; the street vendors, obviously, who are mostly Afro-Caribbean and more persistent than in other regions with their Span-glish sales pitches.  “Futbol jerr-see de Colombia!  Promocion!” and “Camisetas!  Good price!” and “Look!  Look!  Barato!”  Some wander the plazas with tottering stacks of white-straw fedora or arms strung with beaded necklaces: “turquoise,” shells, elaborately woven seed-beads. Others set up blankets in the shadows of a historic building, touting cheap embroidered bags and chintzy bottle openers and beaded bracelets, all in the yellow, red and blue of Colombia’s flag.

In the early morning, and around lunchtime, there are “normal” Colombians too, in their pressed pants and plaid short-sleeve shirts, hurrying to work with folders under their arms, calling out greetings to each other and kissing cheeks with well-coiffed women in white pants and silky blouses, picking their way along the treacherous sidewalks in four-inch heels.

(More gorgeous Cartagena photos at the end of this post)

THE ROAD THROUGH BARRANQUILLA

The road between Santa Marta and Barranquilla traverses a thin spit of land, 12 miles long, separating Cienega de Santa Marta from the Caribbean Sea.  As you approach from the Barranquilla side, the road is lined with post-apocalyptic former wetlands, bony fingers of dead trees reaching up out of salt flats. Periodically the road veers closer to the ocean, the unexpectedly large breakers roiling against uninspiringly grey sand beaches.  The whole look is distinctly anti-Caribbean, featuring none of the calm turquoise waters gently lapping palm-shaded white sand beaches that appear in every postcard and cruise ship ad.

The towns of Pueblo Viejo and Cienega, strung out along this spit of land separating bay and sea, are heart-breakingly poor.  For miles and miles, dwellings patched together from cinder block, scrap lumber and corrugated metal line both sides of the road.  Where the salt flats widen, they march back in uneven rows, in various states of disrepair and weather-proof-ness.  On the bay side, which seems to be the more desirable real estate, some lurch unevenly on stilts, surrounded by neat squares of water demarked by sticks and black netting.  Sprinkled sporadically throughout the greyness are dwellings painted in lurid color combinations that somehow work in the tropics, yet look ridiculous back home, like that shirt that seemed perfect in the shop on Kauai yet gets donated to Goodwill — price tag still attached — the next year.  Hot pink and lime green.  Mustard yellow and turquoise.  Brick red and electric blue.  There are soccer canchas every mile or so, upside-down “U”s made of pipes standing forlornly at two ends of a salt flat.  Invariably there are plastic bags snagged on each goal, flapping tiredly in the wind and a pack of boys, running barefoot back and forth. 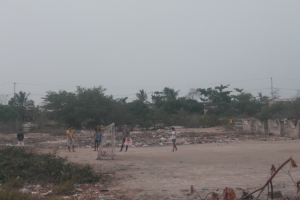 Behind the bay-side houses stretches the cienaga, pocked with rowboats.  Each holds two men, one to paddle and one to lean over the bow, peering intently into the water, circular net at the ready.  When something of interest is seen, the net is flung wide, with a wrist flick that calls to mind pizza dough, spiraling out and gathered back in quick succession.  It must be backbreaking and disappointing work on this long-fished stretch of water.

Along this road — like most in Colombia —  the bus frequently slows for a speed bump, a toll booth or a checkpoint populated by bored-looking and heavily-armed policia or militares barely old enough to shave.  Each time, we are flocked by vendors crooked under ancient styrofoam coolers of water bottles and Pony Malta or wire crosses strung with bags of cheesy ring-shaped crackers and galletas de greiga, a crumbly sugar-encrusted treat. Our driver, the Basque-named Arnolfo originally from Bogota, waves them away imperiously.

Arnolfo takes his job as our guide and protector for the day very seriously. At the mud volcano, he informs us that he will stop at a market for drinks if we are thirsty; the prices here cause him physical pain. When the boys announce an urgent need for a bathroom, he veers immediately to the side of the highway, trucks lumbering past, and points to a scraggly bush fronted by a trash-adorned barbed wire.  When we ask about a place for lunch, he nods once and we find ourselves deposited along a long wood table in a crowded street-front restaurant, eating a stunning roast chicken with garlic sauce.  The boys sat at their own table, Gatorades in one hand, plastic bag on the other as they tore apart their own private chicken, to the consternation of Arnolfo.  “En Colombia, los ninos siempre aca [in Colombia, kids are always right here],” gesturing to his side with a philosophic shrug. 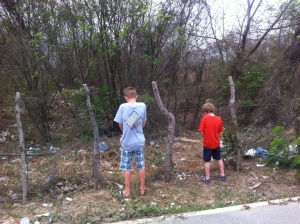 Arnolfo has brought his adult son, Dieter, along for the trip.  Dieter is being groomed to take over his father’s transportation business.  He both speaks some English and seems to have a level of hustle that his father lacks; three times he asks when members of our family are returning to Cartagena and exhorts us to “coll me feerst, bafor dee udders.”  Dieter’s wife and daughter live in Santa Marta; when we stop for lunch, he runs into the shop next door for a sticker book in preparation for his visit.  He proudly shows us each in turn a short video of his six-year-old daughter dancing, stripper-style, in a school performance. 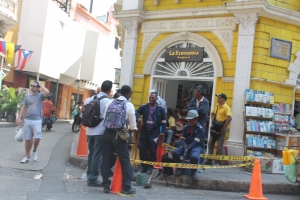