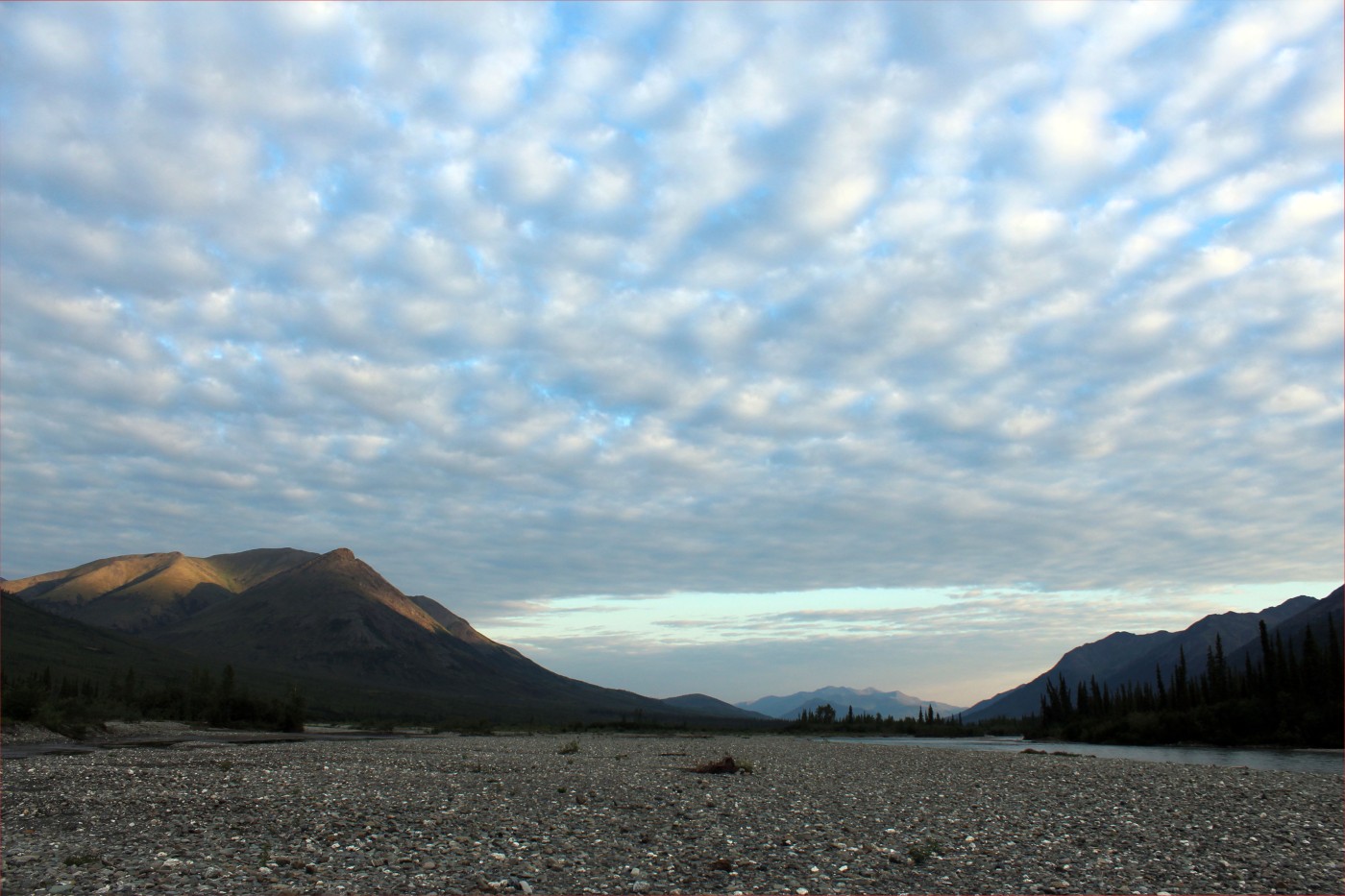 Tip #1: If you see a bear and the bear is not aware of you, quietly and calmly leave the area in such a manner as to avoid being detected. Do not approach more closely for any reason.

It’s an hour and a half flight from Fairbanks to Bettles, Alaska. The nine-seater plane leaves not from the official terminal with its TSA-approved metal detectors and a coffee shop, but from a hut on the far end of the runway where “check-in” involves weighing your bags twice but never asking for identification. For the first twenty minutes out of Fairbanks, there are signs of humans: the straight scar of a path through trees, a tin roof peeking up. For the next half an hour, the plane tracks the Dalton Highway, the only road north of Fairbanks, running ten hours to Prudhoe Bay on the Arctic Ocean. The Alaska Pipeline parallels the Dalton Highway on this stretch, aboveground segments silver-straw-like in the afternoon sun. And it’s always afternoon sun here in mid-July. The sun circles the horizon, dipping down between 1:30 and 3:15am for a drawn-out twilight followed immediately by dawn.

It’s not a direct flight to Bettles. The pilot dips down into a vast valley of pothole lakes scummed over with algae to land in Allakaket, the only other labeled dot on the map, just south of the Helpmejack Hills. He drops the mail — Zappos box perched on top — and two counselors for “fish camp.” It isn’t clear whether this is a summer camp for children or an opaque fish-scientist joke.

In Bettles, you sit on the front porch until your bush pilot is ready. Bettles’ official population is 12, but the firefighters are in town, and some National Park Service surveyors, plus various tourists on their way in or out of the bush. A few of the tourists are older, in clean fleece and expensive eyeglasses; they are bagging two national parks — Gates of the Arctic and Kobuk — in one expensive day trip, staying in the lodge where the flush toilet is located. The other tourists — and this is your crowd — are camping in the airplane hanger or in the bunkhouse, heating dehydrated beans and rice in their Jetboil while waiting for the weather to clear. The younger residents of Bettles gather around your children on the porch, and a few of the women, ravenous for conversation.

Tip #2: If the bear is aware of you, identify yourself as a human. Talk to the bear in a calm voice and put your arms out to the side and move them slowly up and down. You want the bear to know quickly and without doubt that you are a person and not some type of prey animal. Avoid direct eye contact with the bear but do watch it to see what it does next. The most important thing to remember if you do encounter a bear is, don’t run! If you run, you may very well trigger the bear’s predatory instincts and if it wants to catch you, it will. Stop and calmly assess the situation.

Before leaving Bettles, you must complete backcountry orientation with the park ranger’s apprentice, a college student named Noel who looks vaguely perplexed about how he ended up banished to a tiny town outside Gates of the Arctic National Park. Because the park itself has no roads and no buildings — though it is the size of Switzerland — the rangers perch around the edges. If you aren’t carrying firearms — which will surprise Noel as well — your orientation will focus on bears and poop. “There’s no search and rescue,” Noel is careful to tell you, “so take care of yourself.”

When your partner-in-travel suggested taking the kids north of the Arctic Circle to camp on a river far from other humans, you said yes, of course. Partly this was because it sounded beautiful, but also because a disconcerting amount of your self-image is dependent on the narrative that you are an adventurer and kind of a badass. This is something you might reflect on, but perhaps not now.

When your pilot is ready, you clamber into a 1967 Beaver, the Deco-style deHavilland logo and dashboard straight out of a World War II movie. “Second to last one ever made,” says the pilot. This brief statement comprises the whole of his conversation with you. It is clear he moved to Alaska to avoid small-talk.

His “second-to-last” assertion is not reassuring, nor is his takeoff strategy: peering left and right and left again before pulling onto the runway, gears grinding. But it’s too late and you’re off the ground in a winged tin can that buzzes like a cheap lawn mower, lurching up and up and up. You have a moment of what-have-I-done but then you’re too busy smushing your nose against the window as the trees recede to an endless bristly carpet, broken by tortured rivers weaving through the tundra. So busy in fact, that when you look across the plane to grin at your children, you are startled to see a scree-covered peak right there out the opposite window.

Thirty minutes later, the pilot circles a gravel bar on the river twice, tilting his sunglasses up to peer out the side window, and suddenly you’ve landed, jolting over boot-sized rocks. He unloads your gear — four backpacks and three bear-proof containers full of instant mashed potatoes, dehydrated hummus and a Costco-sized bag of peanut M&Ms. He’s spun the Beaver in a tight circle and taxied off before you’ve even registered that you are on a gravel sandbar. In the middle of a glacial river. And he’s leaving you here for four days. 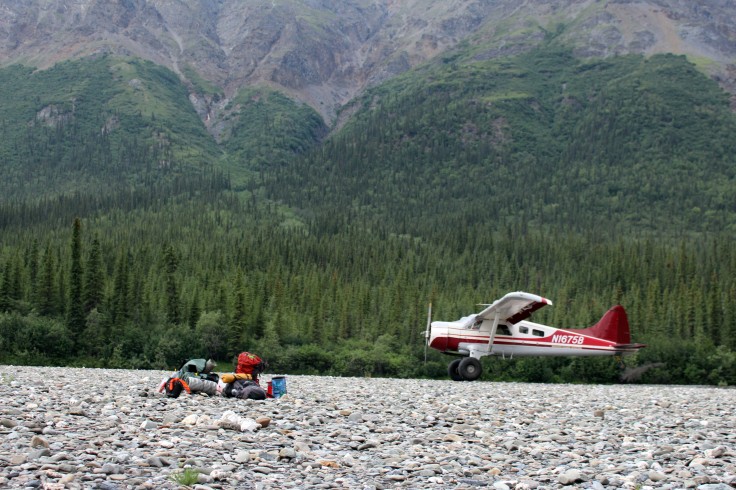 Tip #3: A curious bear will stand on its hind legs, sniffing the air. Make it clear to a curious bear that you are human and it will likely leave. A defensive bear will hunker low and rock side-to-side. Consider slowly backing away, but do not turn your back on the bear! Defensive bears will sometimes bluff-charge you. It is critical to stand your ground and not run.

You will quickly discover that everything in Alaska — except the planes — is uncomfortably large. The mountain peaks tower. The valleys are treacherously proportioned; the other side doesn’t get any closer as you walk and walk and walk.
The two “gates” after which the park is named — Frigid Crags and Boreal Mountain — loom over your gravel bar. In photos, Boreal looks daunting yet accessible: a short trip over some moss-green hills, then a scramble up the ridgeline to the peak. This is the kind of hike your family lives for, but the reality is different. The smooth Sound of Music hills are in fact soggy, brush-covered tundra: the basketball-sized tussocks roll when stepped on, dumping your foot into the crevices filled with matted moss the texture of wet Nerf footballs. Brambly shrubs hide the terrain so each step is an unpleasant surprise. You find yourself standing on a 30-degree incline, calf-deep in a bog, wondering about the physics of this experience. 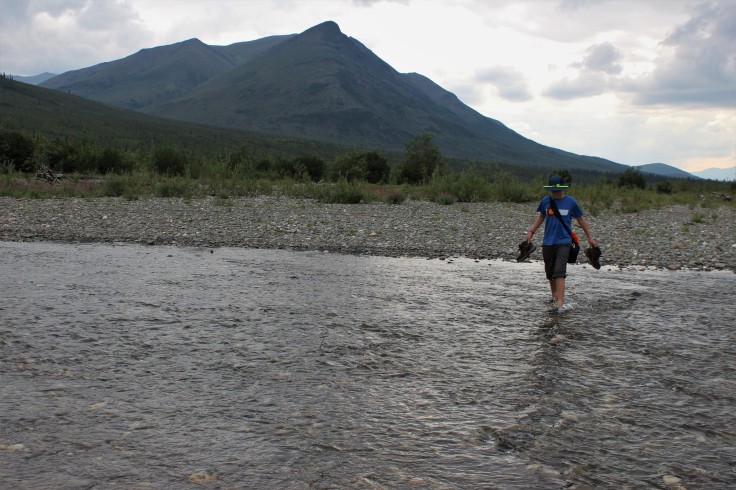 You and the kids will decide to turn back. There will be a brief debate about who keeps the satellite phone: the one headed solo up a mountain in bear country or the one with children. But that’s not really a question so the phone will bounce lightly against your left hip — the right holds your holstered bear spray — as you and your children customize ‘80s pop songs with bear-specific lyrics on your descent. “Hey, bear, hey bear, don’t drrrreeeaaam I’m food, Hey bear, hey bear.”

Your children will skip 4824 rocks across the smooth tributaries of the Koyukuk while you wait for the other adult to return.

Tip #4: If a bear attacks you, your response depends on whether it is a black or grizzly (“brown”) bear. Color is not a good guide; both come in a variety of shades. A grizzly is identifiable by its flattened face and the signature “hump” on its shoulders. With grizzly bears, playing dead is your best defense. Lay flat on the ground, face down and cover your head and neck with your arms and hands. Keep your backpack on, if you have one; it may offer more protection for your back. If the bear rolls you over, continue rolling until you are face down again. Don’t make any noise and don’t move until you are sure the bear has left. With a black bear, fight back. Punching its nose is a good choice.

Two days later, you’ve found wolf tracks but no human tracks. Just as you’re getting dressed after skinny-dipping in the river, two kayakers appear around the curve. You stare at each other open-mouthed for a moment and then everyone starts laughing and hooting, “Humans!” You wave like they’re your best friends and when they disappear around the next curve, you feel oddly abandoned.

Four days later, it’s raining when the pilot is supposed to pick you up, long rolls of thunder barreling up the river valley. You pack and huddle in the last tent with your gear, playing hearts and gin and, in desperation, even Go Fish. As afternoon progresses, you use precious satellite phone minutes to call the flight service, just to check if 1967 Beavers fly in storms.

Judy, on the other end, says, “Oh, were we supposed to pick you up today? I thought it was tomorrow.” You are 110% sure you triple-checked the paperwork and it all said Thursday.

When the bush pilot arrives and your gear is bungeed in the back of the plane, your partner-in-travel tells you that he found grizzly tracks a quarter mile from camp on your first day. He’s smart like that — not telling you — knowing that you’d sit up all night, bear spray clutched in hand, jumping at every snuff and sigh of the wind and river. But now that you’re on the plane, watching the braids of the Koyukuk recede and lightning jump clouds in front of the plane, you can’t stop shaking. Omigodwesurvived, omigodwesurvived, omigodwesurvived.

Later, in the Museum of the North at University of Alaska in Fairbanks, you will admire the wildlife photographs featured in the hallway. Reading the photographer’s biography, you will discover that he was dragged from his tent by a grizzly and killed. You will reflexively reach for your bear spray, but it’s not there. Instead, you will accidentally check it in your luggage with your wet boots, and it will make it through TSA despite all their signage.